Andalucian Must Do’s and See’s in Southern Spain 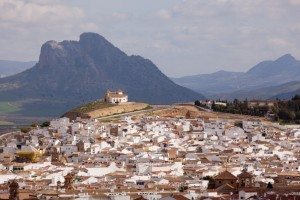 In the shadow of the Sleeping Giant

Andalusia has many ‘must see’s’ and ‘must doe’s’ ……..the hardest thing is choosing exactly where you would like to travel to and what you would like do on your small group tour holiday. Below we have given a very ‘short’ list of some of the ‘main events’ in Andalusia.

The Alhambra, Generalife and Albayzin in Granada, The Cathederal, Alcazar and Archivo de Indias in Seville, The Mezquita and Historic City Centre of Cordoba, The Renaissances Cities of Ubeda and Baeza in Jaen province, the 68 items of cave art spread throughout the provinces of Granada, Jaen and Almeria and the DoÃ±ana National Park in Huelva.

2. Ronda……the picturesque gorge town so loved by Ernest Hemingway and Orson Welles and the home of modern day bull fighting and well worth traveling to whilst in Andalusia.

3. Walking in the El Torcal natural park with its natural limestone sculptures.

4. Tarifa and Bolonia beaches and the Roman ruins of Baelo Claudio.

6. A 1 hour segway tour of the Malaga City Centre followed by tapas.

7. A visit to an Extra Virgin Olive Oil producer and museum and a similar visit to a Bodega and wine tasting in one of the many wine producing towns in Andalusia.

8. Where the Med. meets the Atlantic and you can see as far as Africa……….a visit to the Rock of Gibraltar.

9. Travel to the picturesque Andalucian Pueblos Blanco of Grazalema and Montejaque, south of Ronda

10. Take the  time to savour the Andalusian culture and way of life…..you will feel much better for it.

For most people, Andalusia quite simply is Spain….the home of the quintessential Spanish ingredients of bullfighting, castles, flamenco, sherry, tapas, siestas, fiestas and ferias. Make your Cultural Tour Holiday in Andalusia an experience to remember.